Multidisciplinary artist Sarah Abdu Bushra leads us into the world of memory via creative research that focuses on the physical language of dance, via her collaboration with performing artist Dawit Seto.

What is present day Africa? Straddled between contemporary aesthetics heavily drawing from the past and a collective flight that plugs our imagination far into the future – reading this question from the transcription of a panel discussion ‘Under Fire: Defining a contemporary African dance aesthetic – can it be done?’ I can’t help but wonder if these swings to the past and future are ways of evading a potentially triggering question: what does Africa look like today?

Narratives tracing the beginning of contemporary dance in Africa hinge on imperial perspectives and the continent’s colonial history, with the assumption that modernism and contemporary are inventions of the West. While the inception and definition of contemporary art is up for debate, the proscenium-based performance structures are undoubtedly a Western influence and remnants of the imperial objectifying gaze. In alienating the dancers from the dance, the stage creates the concept of an audience and an experience of a performer as an object. In the case of “African dance”, this object comes with a set of formulaic aesthetics that qualify it as black and African.  Movement Vocab is an attempt to revert the authority and process of image making of black bodies on stage from the colonial reductive gaze to the exhaustive circular narratives within the context of Ethiopian culture. Conducted in partnership between performing artist Dawit Seto (the brainchild behind the project) and myself, Movement Vocab is a creative research and cross-media collaboration developing a new contemporary dance technique inspired by movements of traditional Ethiopian dances.

Through research and practice, Movement Vocab translates embodied knowledge and experience into movements, which the body uses as a language to communicate otherwise illusory happenstances of memory and identity. This research equates the act of creating to that of recalling gestures of the past stored in a Body, which is understood as a collective corpus of a community. All this, in an act of resistance against the physical and spiritual occupation of its landscape.  As its base, it borrows from Congolese dancer Faustin Linyekula’s body on fire: “my blood is really blazing as if in flames, and my history in ruins”1 to imply the urgency and anxiety of rewriting corporeal history. In equal parts defiant and optimistic view, giving credence to the act of erasure, that has the power to leave a mark but is also revertible through summoning the past via memory. In essence, the basis for Movement Vocab’s practice research is understanding the somatic experience as spatially bound but temporally set free.

This dialogue with the past has a thematic recurrence throughout Seto’s professional dance training and practice. Like many other Ethiopians, he learnt dance through imitating movements enacted during his childhood in ceremonial practices common in many households. Before claiming national and continental relevance, Movement Vocab is primarily an investigation of a personal story. In my role as a collaborator in telling and curating the narrative, I’ve drawn parallels between the development of the project and Seto’s corporeal and intellectual traverses. It has been a revealing journey. This subjective approach was also a means to break away from boundaries of identity, both ethnic and national, which limit the impact and time capsule the progress inherent to the language of dance.

The inspiration towards the mechanisms of developing a new contemporary technique as well as the audacity to create without waiting for approval came from Seto’s training at Senegal’s L’Ecole des Sables and his exposure to the works of choreographer Germaine Acogny, popularly referred to as the mother of African dance. Her commitment to making visible the order in the seemingly chaotic records of movements from West Africa and her fidelity to the forms of black bodies, gave Seto the framework to engage with East African movements. Having spent a crucial period of his creation in France, Seto claims further ties to Acogny’s work in sharing an environment of cultural convergence between Africa and Europe.

In our research we collected disparate accounts on the genesis of the upper body movement distinctive to Northern Ethiopia. My input has been geared towards outlining the visual and textual narratives to shape the course of movement creation and development. From this process, five thematic movement categories emerged, each unraveling a host of possibilities in which the Movement Vocab technique could take form as a choreographic piece. In one of these five2, the circle dance is inspired by the image and notion of wholeness symbolizing life and guided the storyline for the inaugural Movement Vocab performance, which premiered at Alliance Ethio-Française, Addis Ababa earlier this year. The showcase was accompanied by a photo exhibition and a video art projection and narrates a para-fictional journey across the cityscape of Tigray, a Northern Ethiopia region from which the movements are inspired.

Working with the body as an epicenter and the stage as an archival site for performance, the immersive cross-media showcase explores both the potential and limitations of the body as a storyteller.  The poetic interlacing of performance, text, and visuals evoke emerging bodies trailing behind each gesture and rhythm of the performers. A projection of archival footage of Tigray traditional dance played during a live performance demonstrating the same set of movements slowly morphing to their current form, as they appear in Movement Vocab technique, dissolves the demarcation between two extremes: the Avant garde [the ever changing new] and the traditional.

Performances are becoming increasingly interdisciplinary with artists employing new technology in the process of creating and showcasing their work. Within the ongoing coalesces of art and academia, performing artists use digital platforms to conduct their creative research within anatomical mechanisms. The technological approach to performance could be a way to extend the body inwards and outwards.

Within the scope of Movement Vocab, digital sensors could play an important role in the process of extracting vernacular movement and accessing body memory.  Taking a video documentation of a performance, a choreographic score could be created, and movement data injected from one body into the other.3The shortcoming in muscle stimulation is the inability to digitally trace and copy emotions, which are the core of performance art.  But digital performing artists such as the multidisciplinary Choy Ka Fai, say expressions created from emotions could be stimulated from outside through a reverse process. Enacting the exact physical movements, the body creates these emotions from outside, which otherwise naturally spring from within.

Prior to digital technologies infiltrating the performance art scene, dancer Pina Bausch described this process of emotions emanating from outside as follows, “All of a sudden I noticed it makes a big difference, behind closed eyelids, whether I look down, or [sideways]. The right feeling was there immediately. The tiniest detail matters. It’s all a language that you can learn to read.”4

When fusing digital tools with the body, a host of new terminologies emerge and the need to create a new language implies a crossover into new frontiers. As a next step, Movement Vocab looks towards applying digital technologies to lightly and meticulously tread between traditional grounding and global accessibility of somatic movements. 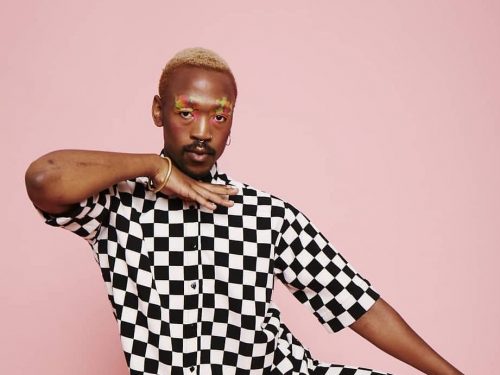 ANYBODIES MOVEMENT: THE DANCE AND BODY POLITICS OF KOPANO MAROGA