A Kenyan digital artist, Nyambura Kariuki’s big plan is to sketch brilliant and subversive alternative African futures. Her growing body of work already screams this. She started drawing during her childhood, making a small business out of her skill while still in high school. Back then, she would charge Kes. 20 to decorate envelopes. So appreciated was her work, she developed celebrity status at the neighbouring boys’ school. Those sleeves were too good to tear up – in fact, a friend still retains a copy.

A recent Communications Degree graduate, Nyambura has been used to juggling classes and personal projects for several years. Now she’s ready to make a mark in the African digital art space with her design work already appearing both locally and abroad. Writer Wanjeri Gakuru recently spoke with her.

I was imitating stuff I liked and also trying to do stuff out of my head. I liked Cartoon Network so I would draw Kenyans in the same way. Cartoons have been the primary drive for what I do.

How did the apprenticeships shape your work?

There was a lot of commercial work, advertisements, books, comics. It was essentially a bootcamp. I learnt how to hold a pen, different softwares, how to talk to clients and the commercial workflow mindset.

What tools do you use now?

How do you source material for your mood boards?

I’m a big believer in “Steal like an artist” by Austin Kleon who advises to pull from all over until you make something from yourself, so that it’s not like plagiarism but inspiration.  My mood board could have ten images and I’ll just pick things that I like until it tells a story more or less close to what I need it to tell. That way I have somewhere to refer from without having to scramble all over the Internet trying to get inspiration.

I noticed that your characters are always cheerful. I’ve never seen you draw an unhappy character.

I guess it comes from my childlike happy side; that can-do part of me. Other things I draw from include black womanhood – seeing yourself as pretty, cute and fluffy. I like the idea of soft nerdy black girls who like pink and flowers and reading novels, but I’m also keen on steady work so that I can show all sides of me. I’m usually sketching while listening to serial killer documentaries. I listen to the macabre even as I draw pretty things; for balance. I just find them interesting. That a world with so many pretty things can also still host terrifying horrors. That’s fascinating.

How did your project The Portal come to be?

I was approached by the Director of Nairobi Design Week. They had a project on Afro-Futurism featuring women as the creators and drivers of that concept. My piece was influenced by the video game Mass Effect 3.

You know how back in the day people used to have supernatural explanations for phenomena that we now understand with the use of science? For me it became about how Africans interpreted goddesses, gods and spirits back in the day. I imagined them encountering ancient aliens who came to earth and landed in Africa. These aliens were scientists. They admired our ancestors and felt they could influence this early life form to be the best possible version that it could be.

The Africans saw these scientists and thought they were gods – because any sufficiently advanced technology will look like magic to the uninitiated – and allowed themselves to be influenced in various ways. I used backwards mapping and chose the Maasai cloth, Kikuyu ear gauges and henna hairstyles of the Himba. In the final image, the scientists have come back. They’d left before because they didn’t feel like humanity then was ready for what they had to offer them. But now they wanted us to join the rest of the universe and galaxies.

Would you say fantastical creatures and beings are part of a recurring theme?

Yes. In my Make it Epic character series, I found inspiration in Shona spirituality from the book, The Ear, The Eye and The Arm by Nancy Farmer. The piece was commissioned by Jotham from Kenyan mass media company, Movie Jabber. It was set in a future Zimbabwe where continuous experimentation by humans on quantum physics and metaphysics has opened up little pockets to other dimensions. People have gotten special powers from these interactions. The main characters in the concept are part of that but they combine spirituality with scientific explanations.

They represent the audiences who attend the Movie Jabber’s comic conventions. It is the mother taking her teenage son (15-17) and babies (8-10). Power Lady disrupts the notion that a female superhero has to have a figure-eight body. How even though such a hero might have strength there’s no outward expression of it.  I drew her as short, muscular and with a thick core. She also has strong legs to support everything. The boy in his late teens is both spiritual and intelligent; we don’t see enough men like that. Lastly, the baby is cute but with an edge like the Powerpuff Girls, but I also wanted her to have darker skin than what’s depicted in the media.

Any particular ideas you’d like to explore in the future?

I want to draw more women, like this idea of ‘Slay Queens’ but expressed through the anger of being a young woman. I’m imagining this chick, her outfits are on point but she’s also carrying an AK47 or a butterfly knife, or a rocket launcher; heavy weaponry and machinery.

Where does this imagery come from?

A place of anger and the need to be taken seriously. Maybe even feared. Weapons signal a dangerous objective and that the holder demands a certain kind of awareness to their presence. But I also want to work with extremely funny women like YouTubers Liza Koshy and Sailor J. I like women being silly and irreverent. 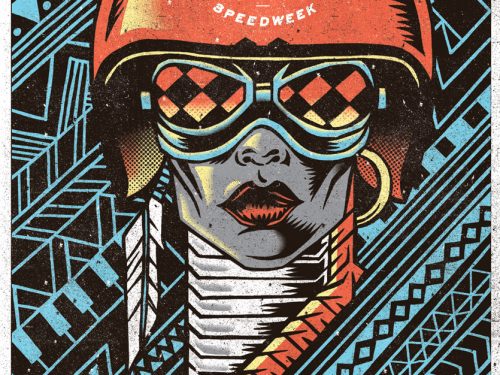 FROM GET OUT TO GOLD BULLION