It has been three years since multidisciplinary artist and author, Phumlani Pikoli, wrote his self-published debut book of short stories, during a time spent in a psychiatric institution for depression and anxiety. After having The Fatuous State of Severity republished by Pan Macmillan South Africa and also presenting a collaborative exhibition on mental illness in Johannesburg, Pikoli has affectionately dubbed his first work, “the little engine that could.”

Acclaimed as being a “rising star in South African fiction writing,” Phumlani can be said to be the country’s literary man-of-the-moment with the recent release of his second book, Born Freeloaders. In a conversational interview, he touched on some of the overlapping themes in his work, which highlights the lived experiences of South Africa’s first generation of Black middle-class youth.

Let’s start from the beginning. What inspires your writing?

I’ve been writing since I was seven and it’s been the only thing that’s helped me makes sense of the world. Also, knowing that I could make stuff from nothing and that I could play with words. At seven I wasn’t supposed to be writing because I am dyslexic, but I realised that you could create your own worlds without needing your parents to buy you Power Ranger figurines. Does that answer your question?

I mean, every answer is an answer.

What are your reflections on your first book The Fatuous State of Severity since it was published? Are there parallels between that first publication and your latest novel, Born Freeloaders?

Thematically, obviously, there are a lot of similarities. With Born Freeloaders there was a very big intention to write a coherent play, with the concept of building self-contained worlds within a structured continuous narrative, with characters that build familiarity and lead the story. But they almost just play anchors to the story and aren’t the primary focus. They’re conduits in which we get to see the rest of everything going on around them. It’s very memory intensive and that’s why language plays such a strong theme and the allegory that runs through it is very much in tune with that. To the point that it is overtly stated [in the chapter] called “The Children without Tongues”. The tongue and language is directly linked to memory, which is directly linked to your perception of the world. It’s playing around with this exposure and immersion, almost to the point of assimilation, whilst realising that it’s a false belonging. The best way I try to describe the characters is that they never really felt settled in their bodies. While they could function, it felt like maybe their bones hadn’t settled properly within their skin.

The power of language is particularly important in your writing …

It’s [language] dislocation, its ability to alienate and its powerful prevalence in South African society. At some point of the day, chances are no matter how multi-lingual you are, you are going to come across a point of unintelligibility living as a South African hearing a language that is not familiar enough. I did have to make the book unintelligible in certain ways to myself to still get across the tone in which I would receive certain messages in certain languages. Language is directly linked with self-knowledge and self-understanding.

I want to speak about representations of the ‘Suburban Black’, ‘Middle-Class Black’, ’Better Black’, ’Uppity Black’…

What’s a fucking ‘Better Black’? Jesus Christ, I really hope I don’t think I’m one of those!

No, no it’s just that at times to talk about one’s ‘middleclassness’ as a Black person can be perceived as self-indulgent in the South African context. Have you gotten any accusations of that?

At first, I was scared about writing a diary-entry for people to now have to buy. That it was some self-indulgent piece of shit [where] I was taking advantage of the landscape in which identity politics were taking centre stage and I could slide in on that dime. But one of the things that was asked during my book launch was whether I have written it ‘unapologetically,’ in a way that goes against Black South African literary expectations. That’s not to say that the book is without consciousness. It’s not to say that the characters live without guilt, but I haven’t put all this weight on these characters that are constantly lugging around this ‘survivor’s guilt’ for having the advantages that they do. Or for having the advantages that they have been given. All they know is that there is a disconnect between their reality and that of the people that look like them.

So, do you feel self-indulgent? Or do you feel like you are representing Black middle-class youth?

The characters are limited. They are between 18 and 22 years old so they are also hella fucking young, and trying to reconcile with the country in which they live in and have a political understanding of where it all got won. Why they have these accesses and proximities and cheat codes, essentially. Yes, the characters have survivors’ guilt and privilege consciousness but, it’s unresolved. I didn’t want them to be these fucking woke assholes who know it all. I needed to play within the limitations and scopes of their ages and what you would have been doing at that time; as a kid, growing up in middle class suburbia. That’s not to say that’s my direct experience but it is some experiences that I’ve seen, noted, looked at and been a part of. So, self-indulgent? Cool, you can say that, but all writing is self-indulgent and choosing what you want to write about and knowing what you write about is always going to be an indulgence in itself. So yeah, fuck it!

Do you believe that there are restrictions put on Black writers?

People say “pressure,” but I think, more than pressure it’s limitation through the exposure of Black writers needing to amplify the collective Black experience, while validating each person within the collective identity’s individual experience. Carrying that, it’s like “no but that really isn’t my job”. My job is to write the story that I had. At this point in time, I wrote the best story I had in the best way that I could and I’m proud of it. There’s no doubt that I am writing from a Black privileged middle-class kid’s fucking experience and all of those markers that people can sort of check off, like “yes, I also had this growing up” ….

But why so flippant about that?

Because, again, there is this weird tension between the space of not being able to write Black people as individuals but then also needing them to be these complex characters within this collective Black experience identity. And it’s like, no that’s really not going to happen and if you are putting that up against writers of old, it makes absolutely no sense. We live in a completely fucking different time. Information is more readily available now than it has ever been so people have more choices then they have ever had. And so, the Black experience in itself is like, cool; there is the collective Black experience that we all face that is predicated off the idea of anti-Blackness. And then there is the fucking individual taste and individual situations. I think people tend to look for Bibles and within the South African literary cannon you can look at motherfuckers who take chances and don’t do that and only get regarded later on. It’s just nonsensical to me. 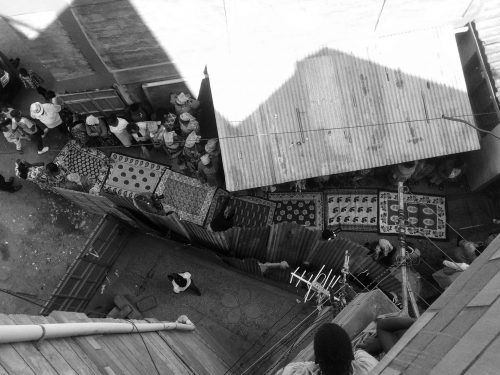