While this year’s Maputo Fast Forward festival of creativity, design and innovation takes place, People’s Stories Project is reflecting on the words and work of a selection of artists who were part of the ColabNowNow phase of this Mozambique digital event last year.

We continue with Andrew Munuwa, a self-taught visual artist from Dar es Salaam, Tanzania.  His photography focuses on daily African urban life in relation to spaces and contemporary culture. Digital illustrations and graffiti art form part of his practice, with his work having featured in art events including AfriCans Street Art Festival (2018 Kampala, Uganda), ‘Future Focus’ photography exhibition by Pichastock (2018 Kenya, Ghana and South Africa), One word for Africa Exhibition also by Pichastock (2017 Kenya, South Africa) and his solo exhibition Mtaani Maskani that took place in Dar es salaam. In this interview, he talks about four of the images that represented his ColabNowNow showcase in Maputo last year.

RETRO CITY – This was in Dar es Salaam, in the city centre. You can see that the image has been desaturated and the actual colours are on the buildings in the middle. Normally when I take pictures they just come. Sometimes I can sit down and think of a way to compose them – but sometimes they just come. When we went to shoot these pictures, I was with a friend. We just went to a rooftop of one of the hotels. We had no permission, but when we were there, we started taking some random pictures and I noticed how the buildings are arranged. You can see a Muslim mosque, an Indian mosque and these other buildings – and I just liked that it shows a diversity of people in Dar es Salaam. It was a friend who gave the image its title. I liked it, so I just kept it.

JOY – This one didn’t originally have a title – although I did decide to name it after the poem Joy by Tanya Chihuntu. This was an easy one. We planned it actually. She [Nikiwe Dlova] was actually shooting outside a train station in Mozambique with another photographer, but I saw the way her hair was moving so I asked if she’d pose for me when she was done with him. In the shot she was just wearing these accessories that match her personality. That’s what I like about it.

[Untitled 1] – This was in Mozambique. It was on the same day that I shot the one of Nikiwe. When we were leaving the train station, I saw these two ladies.  Normally when people see me with the camera they freak out – especially when I point it at them. With these ladies I couldn’t understand the language, but from what I could tell, the lady behind was telling the one in front “the guy is taking a picture of you,” and she was trying to hide. But, the lady in front was just fine. They look happy. I didn’t show them the image because by that time I was in a car and they were at a bus stand. When I was developing it, I was looking at the colours, but I couldn’t get the exact tone for their skin. However, without colour you see a really natural, black woman. This is why I like it.

[Untitled 2] – This was also in Maputo – when we were coming from visiting an artist who lived on the other side of town. We had to cross with the ferry. Inside, I could see this really nice natural Maputo lighting. It was in the afternoon. All the people sitting there seemed really tired – except for this man. He was just looking outside and not caring about anything. So, I just set my camera and took the shot. He didn’t see me. I do create stories for every picture, so to me this was an older man. In his 50s maybe. He was looking outside at this bridge, so I was trying to paint a picture that he’s looking at this bridge right now, and the kids in the future will also be looking at the same [view] saying, when this bridge was built I was a nine year old boy, but that’s in the future. I remember giving it a title, but I forgot it.

Maputo Fast Forward (MFF) takes place from 10th October – 10th November. The theme this year is Identity and Mobility in the 21st Century. 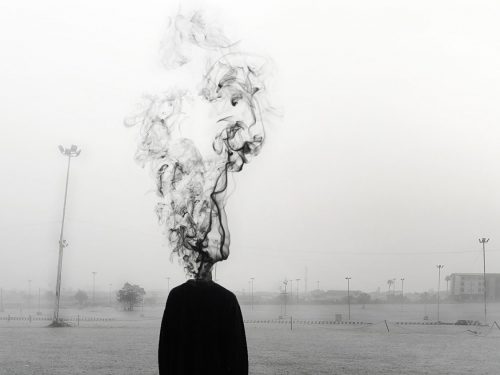