ETERNAL SUNSHINE OF THE OCCUPIED MIND

In Yvonne Adhiambo Owuor’s fantastic debut novel, Dust, a host of characters struggle with the desire to learn certain truths. One of them, Isaiah, perceives this gap in his knowledge as: The fog — amalgram of mistlike griefs, and fear— the state of being haunted, possessed by unrelenting uncertainties.

Similarly, these many weeks of isolation and disruption of normal life continue to feel just as engulfing and suffocating. Thankfully, there are those lighting a way through the haze.

Music has been the number one escape during this crisis, and Kenyan artists have shown up in a big way.  Sauti Sol, Wanja Wohoro, Ayrosh and many more have played online acoustic sets with Nyashinski putting on a damn near concert-level performance. Radio stations have scheduled longer music breaks and festivals such as Africa Nouveau have been curating DJ sets by crowd-pullers like Blinky Bill, Coco Em and DJ Cortega – who are known to spontaneously throw parties on their own pages too.

Cultural organizations have offered free online courses, and many others are running or contributing to fundraising efforts to support those in need, as creatives and ordinary folk alike use their talents to keep hope alive.

Dialing in from their cities of quarantine, the 15 authors read passages from their work and fielded questions from readers across Facebook and Instagram. “It was very important to me to be as representative as possible but I wanted it to be fun and beautiful,” says Wanner. The festival’s topic guaranteed the latter. The theme was ‘sex scenes in African novels.’

It wasn’t titillation for its own sake. Wanner’s cause was political. She says, “I wanted to very specifically put a spotlight on the work African writers were doing. It was nice for people in Anglophone countries to realize that African literature is not just English-African literature. We had four languages but that was just scratching the surface. This continent has over 2,000 languages. What else are we missing that is amazing?”

Performer and storyteller Aleya Kassam also decided to read stories online. Her first focus was on children. “I decided to do something for kids because now that they were home, the parents were going to be struggling,” she says.

Later, Kassam added a slot for adults on her Instagram Live programme that focused on Douglas Adams’ The Hitchhiker’s Guide to the Galaxy. She read two or three chapters each night. Soon, she had built a small loyal audience but Kassam and fellow storyteller, Sitawa Namwalie would need to marshal support from several quarters to aid their percussionist friends, Boaz and Willy.

“They’ve performed with us for a long time; I think six or seven years, but primarily they make their living as gig musicians. They hadn’t had shows for like 2 or 3 weeks and they’ve got family that they are supporting,” she says. Kassam and Namwalie  put on an online theatre show featuring their greatest hits. Boaz even sent a recording of himself playing the orutu (one-string lyre) via Whatsapp which the pair recited pieces to. They managed to raise Kshs. 25,000 ($250) that night.

Kassam says, “The Instagram setup has been freeing because when Sitawa and I want to put together a show we have to work so hard to meet the financial implications. This has allowed us to play in a way we have not been able to before, now that there are no stakes. This thing is completely transient; one person might show up or 500 and in 24 hours it’s gone. There’s a freedom that you have even in the artistry. When the world feels like it’s gonna end, you really release perfection.”

With restrictions on movement and gathering, folks have been organizing private hangouts and dance parties online via Zoom, Skype and Google Hangout. Multidisciplinary artist and citizen archivist, Nyambura Mutanyi was in one such gathering with other writers and photographers.

“There is a sense of community that has been lost. That Zoom call was building that with each other. We were 8 people at the highest point so it wasn’t a crowded room but more like a table at a cafe, which I liked.  It wasn’t an intimate one-on-one which can get weird, and it was also not so large that we needed a moderator,” they say.

But the joy wasn’t without its restrictions and anxieties. They say, “In real life the cafe will kick you out when it isclosing, not after 35 minutes or some arbitrary number like that. When that happens, your banter is halted, then you send a new link and restart where you left off. Part of it feels like you’re being compelled to rush to unpack things.”

However, the archivist in Mutanyi remains wary of how we are recording the events of this time. They say, “We are living through a traumatic period. How do we memorialize it in the moment or after the fact? Someone shared about hand writing a diary through this time because it’s still the most reliable archiving method. How do we memorialize a time where we do not control the means of the memorialization or production?”

Formed in 2013, the Heva Fund offers finance and business support to the East African creative industries. It was founded by The Nest Collective, the Nairobi-based group of multidisciplinary creatives. “Several projects that we were handling could not continue to run as planned due to the ban on public gatherings and international travel,” says Mars Maasai, Heva Fund’s Insights Department Lead.

He adds, “When businesses in our investment portfolio informed us how they have had to rethink their strategies over the next couple of months, we were then compelled to try and ascertain the extent of the impact on the creative industries by conducting a study.”

Their survey received 510 responses from individuals and companies in advertising and marketing, TV and radio, film and photography, music, performing and visual arts, publishing, game development and e-sports, museums and galleries as well as creative industry support services and many other creative industry sub-sectors.

“In our survey, 31% of respondents were registered with a body relevant to their sector, work or craft, while only 20% were registered with a government ministry relevant to [these],” says Maasai. These gaps are working against the creative practitioners now more than ever. A recent announcement by the Kenyan government of a  Kshs. 100 million ($1 million) monthly payout to artists, actors and musicians inspired spirited debate as to who qualifies as an artist in Kenya.

Heva’s plan now and going forward is to strengthen the capacity and transparency of sector representation, and to encourage creatives to register with organisations in their fields. They intend to hold future forums that allow for discussions around policy, practitioner well-being and labour laws.

Maasai says, “Sector bodies, if used correctly, can be a collective bargaining position and a powerful lobbying tool. Stronger representation would make it easier to quantify the contribution of creative industries to the GDP of this country. This would not only be useful to policymakers but it could also assist fellow citizens to see and understand the value of the arts.”

For some, getting online has been a challenge in itself ­– perhaps even a luxury,  and navigating the teleconferencing and social apps designed to make this period easier has required minimal tech-savvy. Even then, a new unexpected hurdle has emerged. Filmmaker Mugambi Nthiga has been curating and hosting a weekly movie night at a local pub since August 2019. He’s now moved the communal experience to Netflix Party but it hasn’t been the same.

“I have noticed that the fatigue from the screen doubles; it’s grown exponentially. We are spending so much time on our screens that we are getting more exhausted by them, yet we don’t have the means to do anything else aside from reading books and cleaning the house—which you can only do for so long—so we go back to our screens because there is a whole other world on the other side but it is making us tired,” he says.

What remains clear is that this season has brought unexpected lessons and opportunities for the artists. Nthiga is preparing for an entirely different world once this crisis ends. He says, “the previous life wasn’t normal. What we had taken as normal life with expectations that it will get better if we put in the effort and the time, that a little bit of money or social step up or access to rooms that we hadn’t been in before were the key to fulfillment and happiness, have been the biggest lies. All of that is based on sandy ground. The thing that has occupied my mind the most is how I can be best placed to make the new world better from the foundation.” 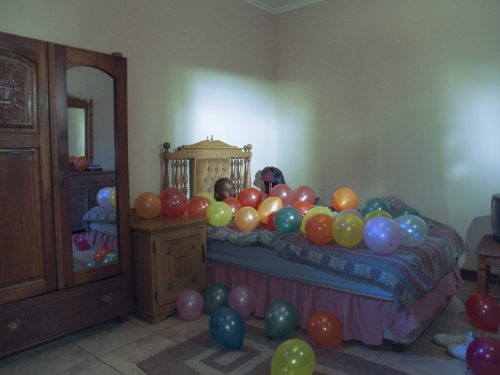 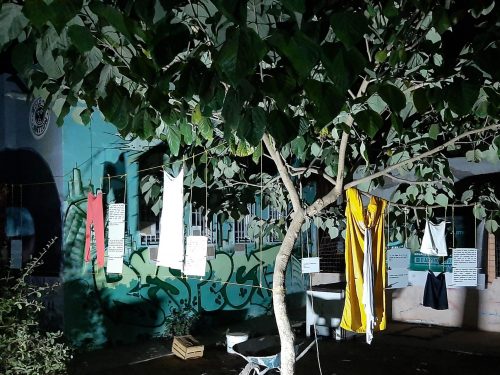 The Ties That Bind: On African Kink